Last week there were definitely some challenges. And although these may not all be "fears" for everyone, in the moment I could have reacted in a much more negative way, so I'm counting them as successes.

Twitter screenshots each day made it easier to compile the post, and I could have easily just posted them without any explanation. I decided that my challenge to myself to write called for writing (imagine that!).

I am so blessed and thankful for those on Twitter who each day have supported me, even with a simple good job/hug/comment after seeing my Operation Eleanor tweet(s). It makes this project that much more doable to know that you have support!

This could be the theme of my week really. I can't describe the homesick I've been feeling. I didn't used to understand what people meant when they said they missed "home" so much it hurt. I get it now. It doesn't help that the job situation is challenging and I feel as though I'm failing. I need to remember that when I came back here in August, I kind of expected that things might not work perfectly and I would need to head "home" in November/December. I just wish I could catch a break and something would work out.

And then, 10 minutes ago, I just gave a link to this blog to a "real-life" friend. That term is so weird now, since most of the people who read here I've now met in person. And the ones that I haven't probably know me better than people who only know the 'off the Internet' me, really.

80% of my closest friends are parents. Why is a Bible study where all the other women are moms so hard for me? It's not like I can't respect their concerns, but I definitely have a hard time relating. And because of that I've gone 3 times out of 7 weeks. I'm going to try to be better, at least as long as I can stay here.

We had prayer/worship night at the small group I attend. I am TERRIFIED to pray aloud. I don't know why, except it goes well with the painfully shy thing. I was rehearsing in my head, I was ready to speak up. Then the prayer ended. And I was relieved. Someday I'll break through that. Someday. 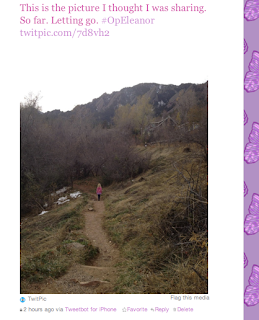 It didn't help that at the beginning of the trail there were about a million warnings about bear sightings. We didn't go much farther than that, and I went after her as soon as I took the picture. She definitely liked exploring and made observations that she couldn't wait to share. The parking lot was scarier. She went about five cars farther than me to get something that we'd left. I was okay-ish until a man walked quickly by me towards her/my car/his car/I don't really care. I definitely went to her again. But letting her take those steps is necessary and important.

K and I had a girls weekend, including her first viewing of The Princess Diaries. She loved it. I was struck by the quote "Courage is not the absence of fear, but rather the judgement that something else is more important than fear." I tweeted it. With at least one error (judgement/judgment??). It was retweeted, at which point I saw the error for the first time. Usually this bothers me, a lot. I'm too worried about what people think about me. Last night, I decided that I was human. Errors are a part of life.

I was feeling crummy this afternoon. Probably because I told my mom that I feel like I have to give up. And then she told me that crying isn't okay, as she always does. I was ready to eat dinner at 3:30 and crawl into bed. A friend from small group sent a "who's up for game night" text at 4 and I decided to join. There were five of us and we played a couple of games. Most of the others I knew, but even then group settings can be HARD for me. Not tonight. I'm so glad I made that choice. (Plus, I won't be awake at 3am this way!)

I have to admit something here.

Tuesday: I took over a classroom. Of out of control second graders. I keep being told that I'm doing well and that there is definite evidence of change. I'm not sure I believe it. I sent a child to the office five times on Tuesday. I didn't have five office trips last year when I had my fifth graders.

Wednesday: There was six inches of snow on the ground. The day before had sucked. I didn't want to get out of bed. I did. I call that success for this experiment. I also drove to work without slipping a single time, so I felt quite accomplished. I had 10 students absent, the day went decently well.

Thursday: I sat at small group and played games without once checking twitter. I fall back on Twitter a lot and I know it. It's nice to know it's there to catch me when I need it and when I'm overwhelmed in settings which is more than I care to admit.

Friday: I started my day with a parent meeting. Parent meetings as a teacher are scary. Parent meetings when you've taken over a classroom three days before are terrifying. I don't know what, if any, difference it made; the day was hard. I finished my day by doing another thing that scares me. I went to dinner by myself. As much as large group social activities cause me stress and anxiety, so do on my own outings to restaurants. I have no idea why but it is what it is.

Saturday: Today started with a baby shower. As if those aren't scary enough, this was a baby shower for a friend from high school. Who I hadn't seen in nine years. There wasn't a single other person I knew. I survived. I almost chickened out five times this week. I knew I needed to go and not just because of this project.

To some extent, I think writing here has gotten scary. I don't know why, but I don't even click on the blogger link anymore. I need to overcome that. I challenge myself to take this month to write more. I know it's good for me, I know it's healing.

If you'd like to join Operation Eleanor/#OpEleanor - check out Megan's posts here and here. Or, just do it. There are no rules really.
Posted by -A at 7:34 PM 3 comments