I'm very happy right now! I love satellite radio, I get to listen to baseball today, Sunday and the following Saturday- and that's all it's telling me right now, but they're will be plenty more. I got to listen to a grand slam by my friend's favourite player and a 2 run homer by one of my favourites- what a way to start the season! 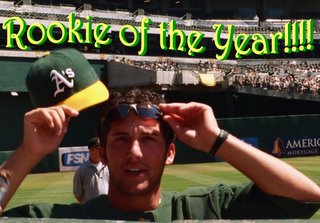 I took this picture in September when we sat right behind the dugout, it's one of my most favourite pictures that I've taken at a ballgame, and I've taken a lot. I love Huston! He was last years Rookie of the Year, and he's an honestly very sweet person. Huston took the time to stop and say hi every single time we were there, and I can't wait until April 1st which is my first game of the season, although technically an exhibition game. My first official game will be Huston's bobblehead day on April 16th and I'm so very excited. Now that the games are actually beginning it seems so close, and yet I have like 7 papers due between now and then!

I attended 14+ games last year in Oakland (a 270 mile one way trip!), 2 games in Sacramento (200 miles one way), and I wouldn't trade a single second of any of these games. I feel so at home over there and if I hadn't commited to a lot of time with K and B this summer, I'd be actively seeking nanny jobs in the Bay Area. I suppose that technically I could after the second/third week of June, but I'm not sure that there are many who would hire me from mid-June through mid-August, that's barely two months!
Posted by -A at 2:38 PM 1 comments